Tex Tech Environmental, Inc. and the Weyenberg Family is an all-American story about a hard-working family who saw an opportunity and with hard work and pride, built upon it successfully.

In 1978 Cleve Sr.’s brother was the Chief Deputy Sheriff in McLennan County Texas and encouraged him and his family to move to Texas. He and his son Cleve Jr. saw a need for on-site Sewage Treatment including Sewage Lift Stations. They’ve been serving large commercial and residential customers, wherever they’re called to be of service: school districts, small municipalities, RV/mobile home parks, restaurants, even the wildlife park in Glen Rose! 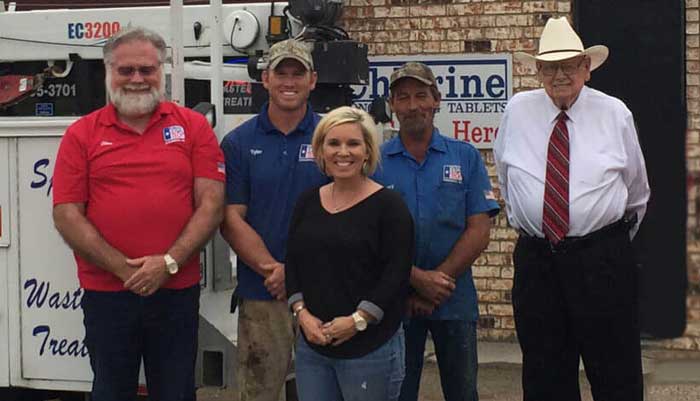 If you’re ever driving northbound on I-35 going into Burleson, you can’t help but notice the 50-foot wide, 16-foot tall mural painted on the south end of the building: a testament to the US Marine Corps and all veterans. You’ll see the likeness of Tyler featured prominently in that huge scene commissioned by artist Brad Smith. Cleve Jr. says a week doesn’t go by without a veteran stopping by to thank him for his support.

At 96 years young Cleve Sr. is still working, part-time, handling some of the company correspondence and basically doing “whatever he wants,” admits Cleve Jr.

Tex Tech Environmental has an A+ rating with the BBB and is a long-time member of the Burleson Chamber of Commerce. Cleve Jr. is actively involved in the community. He’s been on the Members Credit Union board as Vice Chairman for the past 20 years. He’s also a member of the Burleson Rotary Club and, just recently, was appointed a director of the newly founded Burleson Police Foundation.